Next Question is the nineteenth episode (39th overall) of the second season which was broadcast on June 22, 2003.

Ginger develops a crush on her quiz team teacher, Mr. Gardner, and is convinced by Dodie that he likes her back. Ginger ends up embarrassing herself in front of everyone by asking Mr. Gardner out in the middle of a televised quiz competition. Meanwhile, Carl and Hoodsey try to free the city groundhog so they use the situation for product endorsement.

Hoodsey: Spending the night at Higsby's is my idea of cruel and unusual punishment.

Cleetis Boregard: Dang groundhog done bit my arm clear off at the elbow.

Hoodsey: (referring to Brandon) Key-riffic, Carl? Are you even listening to him?

Lois: Ginger, you'll have a lot of crushes in your life. Some will make sense, others won't. You just gotta learn to recognize the difference. 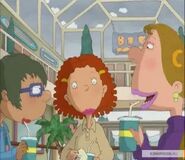 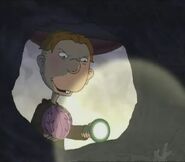 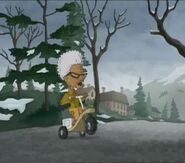 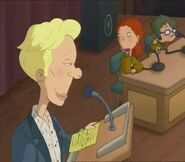 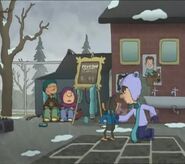 Add a photo to this gallery
Retrieved from "https://astoldbyginger.fandom.com/wiki/Next_Question?oldid=20618"
Community content is available under CC-BY-SA unless otherwise noted.