As Told By Ginger Wiki
Register
Don't have an account?
Sign In
Advertisement
in: Characters, The Killgallen Family, Ms. Zorski's Homeroom Class,
and 3 more

Alive
Miranda Killgallen is Courtney Gripling's best friend, and her sheer meanness will make sure that no one else takes that position (voiced by Cree Summer).

Miranda is Courtney's best friend. The two of them get along well and have very few arguments. Miranda hates Ginger mainly because Courtney talks about her every so often. She fears that Ginger is a threat to her social status and will do anything she can to bring her down. Miranda is shown to be friends with Mipsy as well as the other popular girls. Miranda doesn't make a lot of nice comments and she will usually say something cruel. As the series ended, she became less cruel but she still held resentment towards Ginger.

Miranda's icy cruelty can be traced back to a strict upbringing from her overbearing father. She is fiercely loyal to Courtney and becomes jealous if Courtney pays attention to any one else. She is the meanest to Ginger Foutley, especially after Courtney begins acting friendly towards her. Miranda tries her best to humiliate Ginger any chance she gets, cackling with laughter at every one of Ginger's failures. Miranda's dislike for Ginger mainly stems from her fear that 'Foutley', as she calls Ginger, may replace her as Courtney's best friend, in addition to being jealous when Courtney gives her attention to anyone but her.

Miranda's dislike for Courtney's associates goes beyond Ginger, however. In "Sleep On It" Miranda also expresses her contempt for Courtney's arriving guests. Adding fuel to fire is Ian Richton, a boy that is in their chemistry class who both girls have a crush on. Ginger's romantic interest sizzled; however, she realizes Ian was only using her to get an "A" in the class ("The 'A' Ticket"). Miranda has thwarted Ginger by all means possible, including manipulation (Dare I, Darren?), blackmail (Cry Wolf), false accusations (I Spy a Witch, Ginger the Juvey), backstabbing (Wicked Game) and bribery (Far From Home).

Nevertheless, a small part of her is still kind and she has has been known to do something nice - though she goes to great lengths to hide it. Even 'tough girl' Miranda has a weak side: she has a difficult relationship with her strict parents and has very few actual friends. She uses being mean as a cover up and takes out her frustration on her classmates, especially Ginger.

She's left friendless when she and Courtney have a temporary falling out; Macie states that it's because no body likes her (Trouble In Gal Pal Land).

Apart from her viciousness, Miranda's trademark is her sniping, sarcastic comments.

Throughout the series, Miranda wears many different clothing. At the beginning of the series, she mainly wore purple clothes.

Officer Killgallen: Miranda's father. He is a disciplinary person. In Season of Caprice, he treated Miranda like every other kid at the military camp. She seems to have inherited some her cruel behavior from her father's parenting skills.

Courtney Gripling: Miranda and Courtney are best friends. The two are almost always seen together and Miranda cares a lot about Courtney, even crying when she knew that Courtney wasn't enjoying her stay at Camp Caprice. She is jealous and mean to Ginger because Miranda feels like she is trying to take Courtney away. She goes to to extreme lengths to get Ginger and Courtney to stop being friends.

Mipsy Mipson: Miranda and Mipsy are good friends, though not as close as Miranda is to Courtney. They do share the same hatred for Ginger and often work together to sabotage Ginger's life and friendship with Courtney.

Ms. Zorski: She is Miranda's homeroom teacher. She doesn't interact much with her. They have polar opposite personalities.

Ian Richton: She had a crush on him. She went out of her way to convince Ginger that she thinks Darren is the guy for so she could have Ian for herself. They both attended the dance in Piece of My Heart, but she didn't want to dance because she didn’t want her new dress and new shoes to get ruined.

Darren Patterson: She and Darren become a couple in the episode Never Can Say Goodbye when Darren gets his braces off and becomes a ladies man. But she breaks up with him but they leave each other on good terms.

Ginger Foutley: Miranda's enemy - at least she believes this to be true. Miranda hates Ginger and often goes out of her way to be mean to Ginger, from making fun of her clothes to getting her arrested. When she finds out about Ginger's "Frizzy Lizzies” (her hairy legs), she blackmails Ginger into not talking to Courtney in Cry Wolf.

Miranda talking to Mye in the episode "I Spy a Witch" 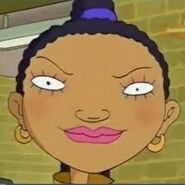 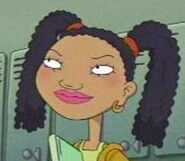 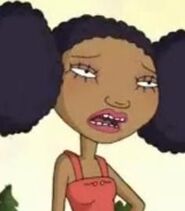 Miranda in the episode "The Wedding Frame" 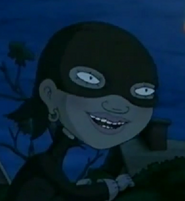 Miranda in the episode "Driven to Extremes" 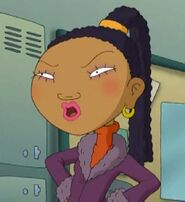 Miranda in the theme song 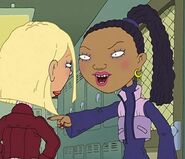 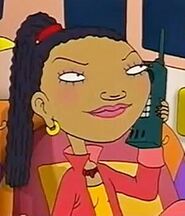 Miranda (left) alongside Courtney (right) in the pilot episode
Community content is available under CC-BY-SA unless otherwise noted.
Advertisement