As Told By Ginger Wiki
Register
Don't have an account?
Sign In
Advertisement
in: Characters, The Foutley Family, Ms. Zorski's Homeroom Class,
and 3 more

Alive
Ginger Foutley (voiced by Melissa Disney) is the protagonist of As Told By Ginger. She desperately wants to be noticed, but doesn't like being looked at. She is both repulsed and obsessed with the social structure that dictates her life at Lucky Junior High. Ginger has always secretly wished for a shot at total and extreme popularity, but when her prayers are answered, she finds herself paralyzed with uncertainty. Still, her excellent writing skills and willingness to fight for what she believes to be right has made Ginger stand out from the crowd, as she successfully tries to balance her schoolwork and loyalty to her friends and family with her growing rise in the ranks of the Lucky Junior High social scene.

Ginger wasn’t considered "popular" until Courtney Gripling, the stereotypical "school diva", decided to befriend her. Through Ginger, Courtney is able to view how the world works outside of the popular clique. However, Courtney's "right-hand woman", Miranda Killgallen, becomes increasingly jealous of Courtney and Ginger's relationship, and stops at nothing to relegate Ginger to her previous role of geek. Aside from Courtney, Ginger has a group of loyal friends, Dodie Bishop and Macie Lightfoot, who are nearly always ready to back her up.

At home, Ginger's mother Lois, single mom and nurse, attempts to give Ginger advice for the majority of her situations, but, as Ginger is often too embarrassed to listen to her mother's reasoning, she ends up learning from her own mistakes much of the time. Ginger's younger brother, Carl (Jeannie Elias), often attempts to use Ginger as a "guinea pig" for his experiments and twisted schemes. However, he has tried this so much that Ginger can usually tell that he is up to something, and refuses to comply. Early on in the series, Ginger did not know much about her father, who left the family shortly after Carl was born. In Hello Stranger she invited him to her poetry reading at school. Although he did not respond to the invitation, Ginger was convinced he would show anyway, and thus, was devastated when he didn't. In An "Even Steven" Holiday Special, Jonas returns to the family briefly after seeing Carl when playing Santa Claus on the street. Though never having officially found his way back into the family, Jonas became more of an installation in the show, appearing at various intervals to give Ginger fatherly advice.

Ginger is portrayed as excelling academically. A self-described "science geek", and frequent "kiss-up" to her chemistry teacher, Mr. Cilia, Ginger is also a very talented writer, particularly gifted at writing poetry. In The "A" Ticket, her crush, Ian Richton, was paired up with her as a lab partner, but used her to get an A so he could stay on the soccer team, much to Ginger's chagrin. Ginger is a favorite of her English teacher, Ms. Zorski, because of her talent for writing. Ginger once wrote a poem entitled And She Was Gone (in the episode And She Was Gone), to Ms. Zorski's concern, who subsequently sent Ginger to the school counselor. Her talent for writing is expounded on in the series finale, when we are shown that Ginger has become a successful author later in life. She was also elected to the student council.

Ginger's love life wasn’t terribly successful throughout the course of the show. Initially, she harbored a crush on Ian Richton, which ended when she discovered he was only using her to get an A in chemistry. Her relationship with good friend and neighbor Darren Patterson (Kenny Blank) was incredibly tumultuous and underwent much change during the series. In Dare I, Darren? Ginger began to look at Darren in a more romantic light following Miranda's suggestion that they (Ginger and Darren) would make a good couple. Later on, in the episode Never Can Say Goodbye, she develops a physical attraction to Darren after he gets his headgear removed. Despite attempts to deny these newfound feelings, Ginger becomes incredibly jealous when Darren and Miranda begin to date. Finally, in Far From Home (Part 3), Ginger and Darren become an official couple. However, when they reach high school, Darren cheats on Ginger, leaving her heartbroken. She then finds comfort in a new friend, Orion. She and Orion never have an official relationship, but more of a flirtatious friendship. However, in the series finale, The Wedding Frame (Part 3), Ginger "takes the leap" and is shown with Orion at her mother's wedding.

However, at the end of the episode, when Ginger's future is shown, she‘s not only wearing a wedding ring, but is shown with Darren, who’s holding a baby that looks rather like Ginger. Another notable relationship that Ginger has had is with Sasha, a boy she met at camp. She left camp on good terms with Sasha, but when she visited him at his school in Ginger's Solo, he tells her he has a girlfriend.

Ginger is a very nice girl and will always be there for her friends. However, she never puts up with anyone's nonsense. Whenever Dodie becomes over emotional or insensitive, Ginger will call her out on it. When Coach Candace tried to leave Dodie off the cheerleading squad, Ginger confronted her and said she was wrong to do that. In Driven to Extremes, she stood up to Mrs. Grimley and didn't back down. So while Ginger is a kind hearted person, she’ll stand her ground when the situation calls for it.

Ginger's most notable feature is her curly red hair that compliments her name. Otherwise she’s a fair-skinned girl of average height. Her face resembles her father, except for her pink lips. Clothing wise Ginger seems to prefer a t-shirt and pants approach although she has been shown to wear skirts and dresses for special occasions.

Lois Foutley: Ginger's mother who‘s always prepared to give her daughter any kind of advice when she needs it.

Carl Foutley: Ginger's younger brother. Despite the fact that Carl often grosses her out, she genuinely cares about him and will defend Carl against anyone who treats him unfair.

Jonas Foutley: Ginger's mostly absent father. In the early episodes Ginger keenly feels her father's absence and nourished some hope that her parents could be reconciled. Later when Jonas appears more often, Ginger will seek him out for talks and advice.

Dodie Bishop: One of Ginger's two best friends since second grade. They have a strong bond that, though sometimes strained due to changes and bouts of jealousy, survives (jr.) high school.

Macie Lightfoot: Ginger's other best friend since second grade. Often the voice of reason, she looks out for her two friends and questions some of Ginger and Dodie's ideas. At the same time, Ginger looks out for Macie since she can be weak-willed at times.

Courtney Gripling: The popular rich girl with whom Ginger becomes friends in Jr. High. Just as Ginger (and her friends) are in awe of Courtney's popularity and riches, Courtney is intrigued by Ginger's lifestyle, or Gingerisms as she called it once.

Mrs. Gordon: Ginger's teacher in elementary school. Gordon was very fond of Ginger and tells Carl so when he‘s in trouble again.

Mr. Cilia: She’s one of his favorite students. He loves having her as a student and is proud of her when she does well.

Mr. Gardner: She developed a crush on him in Next Question. She interrupted in Quiz Bowl to ask him and ends up humiliating herself. She saw him in the hallway the next day and all was well.

Ian Richton: Ginger's first crush since third grade that lasts till jr. high. In the pilot episode, Ian kisses Ginger's cheek, but in the series they never made any real romantic moves, except maybe Ian giving Ginger his jacket, or Ginger grabbing his hand during a movie. Sometime during jr. high she gets over her crush.

Sasha: Ginger's summer love during Camp Caprice. Sasha later never replies to any of Ginger's letters because he is back together with his old girlfriend, causing Ginger grief when she discovers this. They later meet again at another summer of Camp Caprice.

Jake: A cool high school student Ginger meets in the episode "Fast Reputation". A rumor spreads that she and Jake made out during a high school party Ginger and her friends 'crashed'.

Joaquin Cortez: When Ginger plays a main role along with the hot new transfer student Joaquin, Ginger finds herself falling for him, even though Dodie is already in love with him.

Fred: A seemingly older student at Avalanche Arts Academy who is interested in Ginger.

Darren Patterson: Ginger's best friend and first true boyfriend. They start dating after Ginger was accepted at Avalanche Arts Academy for a semester until somewhere in their freshman year in high school. They withstood an attempt to break them apart by Miranda, Mipsy, Dodie and Macie, and start high school with the resolve to stay together. However, they drift apart and when Darren develops feelings for head cheerleader Simone, he breaks up with Ginger, causing her great distress. Darren later misses Ginger.

Orion: Ginger's second relationship. They meet during a Saturday detention where Orion helps her escape. Orion is impressed with Ginger's lyrics writing and asks her to join his band. They grow closer after Ginger's break up with Darren.

Hoodsey Bishop: Carl's best friend. He and Ginger don't converse that much, but she defended him against Courtney after his bed wetting accident.

Will Patterson: Darren's older brother. Ginger enlist his help when Darren thinks Courtney asked him as a date for a dance, when it was actually meant for Will. Also, thanks to him, Laetitia's party, organized by Ginger becomes a success.

Laetitia Bowers: A goth transfer student who has trouble fitting in. After hearing some disturbing and ungrounded rumors, Ginger is determined to help her fitting in by throwing a party at Laetitia's (funeral) home.

Miranda Killgallen: Courtney's best friend who hates Ginger as she sees her as threat to her friendship with Courtney and her crush on Ian Richton. She is often seen belittling Ginger and trying to get her in trouble.

Melissa "Mipsy" Mipson: A sidekick of Courtney and Miranda. She conspires with Miranda to get rid of Ginger by forcing a full scholarship at Avalanche Arts Academy and assists in an attempt to break up Darren and Ginger.

Buzz Harris: Ginger tried her best to pair him up Lois out of fear of her mother being lonely. Buzz fixed a few things in the house which Ginger didn't exactly like. His relationship with Lois eventually ended.

Ginger in the pilot episode 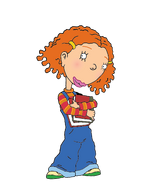 Ginger in her pj's 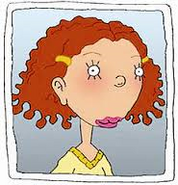 Ginger celebrating both Hanukkah and Christmas

Ginger writing in her diary

Teenage Ginger staring at her pre-teen self

Ginger in the Far From Home promo art

Ginger in her winter outfit 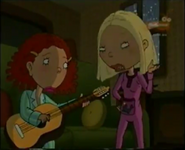 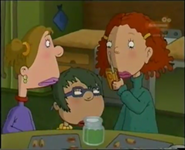 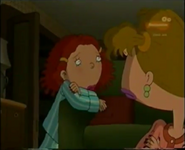 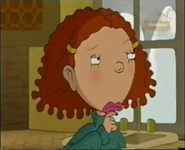 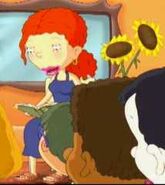 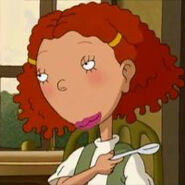 Ginger in the theme song