As Told By Ginger Wiki
Register
Don't have an account?
Sign In
Advertisement
in: The Bishop Family, Characters, Ms. Zorski's Homeroom Class,
and 3 more

Alive
Deirdre Hortense "Dodie" Bishop is an ultimate chatterbox and recycled gossip authority, and has been Ginger's best friend since second grade along with Macie Lightfoot.

Dodie appears in the pilot episode, The Party but makes her official debut in the first episode of series. Dodie always has the latest news on the student body at hand and is possibly the most desperate for popularity (and for that reason the least likely to get it). Still, the knowledge she has about her peers is impressive: Dodie can tell you the exact shade of lipstick each of the popular girls wear, why it does or doesn't work for them, and what each of them is best known for. Other than that, Dodie loves slumber parties and has been known to be somewhat of a drama queen.

Dodie craves attention and tries to do anything to improve her social status (which often fails). For example; Dodie once took over the school announcements, during a lice epidemic and almost revealed that Courtney had them (Of Lice and Friends). She also faked an injury to make the pep squad (Dodie's Big Break). Of the three girls, Dodie flaunts a more girly and dramatic style, though she gradually becomes more mature as the series progresses. Dodie becomes upset when things don't go her way or her reputation is at stake - she even became mad at her mother because she was hanging out with Miranda and Courtney (and thus was more "popular" than herself).

In a future sneak peak episode, Dodie is shown to have married Chet Zipper, and has a baby girl. She is still good friends with Ginger and Macie.

Dodie has dirty blonde hair down to her neck that is curled in at the bottom. She has long, bigger, purple lips. In seasons 1-2, Dodie wears her hair in pigtails, but starting in season 3, for high school, she wears it down. Dodie dresses in a preppy style and wears some stripes or some plaid and bright clothes. She is always shown to wear earrings that are two studs connected.

Joann Bishop:​​​​ Dodie doesn't have a close relationship with her mother, though over time they do develop a bit of a bond. Joann later gets a job at Dodie's school and is well-liked, causing her to become "popular" (About Face). Joann is hurt by the Foutleys, causing her to ban Dodie from ever speaking to the family again (The Easter Ham) but in the end she decided to let Dodie be friends with Ginger again and have her go to her Easter party.

Robert Joseph "Hoodsey" Bishop: Hoodsey is Dodie's younger brother. They share a typical sibling relationship where Dodie considers him to be an annoyance, but they still have love for each other. When their grandmother died, Dodie was heartbroken, while Hoodsey didn't seem really disappointed because he didn't know her as well as Dodie, which made her very upset.

David Charles Bishop: Dodie and her father both love each other and have a good relationship. They are both able to talk to each other about their problems.

Nana Bishop: Dodie and her grandmother were very close while she was growing up. When her Nana died, Dodie was sad and showed she really cared about her grandmother. Throughout the episode, she grew stronger and tried to not mope about her.

Ginger Foutley: She and Ginger are the best of friends. Their friendship has seen some ups and downs, but in the end they make up and remain best friends. Ginger doesn't hesitate to call her out when her ego gets in the way. The two of them get along well most of the time. Occasionally, they'll have a few arguments but they always manage their way out of them.

Macie Lightfoot: She is her other best friend. Macie generally doesn't like conflict, so she doesn't get into it with Dodie. Dodie helped her out whenever Macie's allergies were setting off.

Darren Patterson: He is her nice guy friend. She gets along with him well. In The Easter Ham, their friendship hit a snag when she wanted him to cancel his birthday party. The two of them talked it out and in the end the party went on. In Kiss Today Goodbye, she wrote him a letter telling him he needs to tell Ginger about Simone. She ended the letter saying "You're friend always, Dodie Bishop."

Miss. Zorski: She is in her homeroom class. She doesn't interact with Ms. Zorski very much, but she is a good student.

Mr. Cilia: She was assigned to his chemistry class in The 'A' Ticket. She was excited when he made Courtney her lab partner.

Chet Zipper: Chet is a mellow boy whom Dodie really likes. He reads the announcements for the school and has a monotone voice. At the school dance, the two were dancing uncomfortably with each other, but this was their first time dancing with each other. Later, the pair are married and have an infant daughter closely resembling Dodie.

Courtney Gripling: She wants to be like her. Early in the series, Dodie admired her popularity. She would try to do things that Courtney did to become popular. As the series progressed, Courtney started to be in her circle of friends. In About Face, she stood up to Courtney and the popular girls when they came to her house to talk about her mother's persona Josie.

Margie: She became a counselor in training under her wing in Season of Caprice. When her cabin broke 14 rules, Margie took away her whistle and permanently suspended the girls. However, the girls stood up for themselves and Margie changed her mind.

Coach Candace: As Dodie tried to get on the squad, she would often to things for Coach Candace in order to fulfill her goal. She ultimately got rejected once Candace found she was pretending be hurt. Ginger convinced her to reconsider and she gave Dodie a fair chance. Dodie ended getting hurt for real and Candace would let her try out next time. 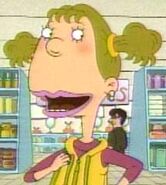 Dodie in the theme song 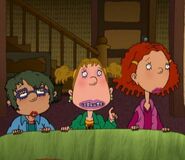 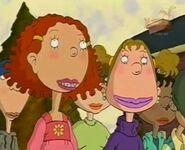